In just one year, Nutramix has touched the lives of women across the island and increased awareness for the importance of agriculture through their ‘Empowered Women Empower Women’ campaign. The campaign was launched in January 2017 with a one-year calendar highlighting women in different areas of the agricultural sector. Last Thursday at Fromage, Nutramix held a thank you luncheon for the active members within the campaign that worked ardently to change the impression most women have of agriculture. With school tours, TV programmes and mentorship initiatives behind them, the group reflected on their mission and the impact they created on the nation.

“Our school tours have opened the eyes of so many young girls who would never even consider going into agriculture. The amount of questions that were asked during and even after the tours were amazing,” said an excited Tina Hamilton, brand manager for CB Group. With her amazing team, Nutramix was able to plan and execute a series of events promoting the campaign.

The group of women delved into hard-hitting topics affecting the many areas within the sector ,and how they can mitigate change and bring life again to agriculture. Many praises were made for their accomplishments for the year, which includes the increase in the viewership of AgriViews on TVJ. “The battle has been long and hard to keep our programme on air, but I am so proud of the work we have done and how much we have grown,” expressed Tannisha Scarlett, producer for AgriViews. “There is so much that can be done to change the perception of agriculture, and people need to be able to see it. AgriViews highlights so many things that can be done in an exciting and well produced programme,” said Scarlett.

“Without farmers we will cease to exist. I can go without a hairdresser or a nail technician. I can even go without clothes and walk naked, but I cannot live without food,” said the passionate Jade Lee ,owner of Little Orchard Farm in Linstead, which is making headway in the agro-tourism business. “By 2050 the demand for food will triple! How are we suppose to feed our nation if no one is interested in going into agriculture?” asked Hamilton, as the women brainstormed ideas for their next move. 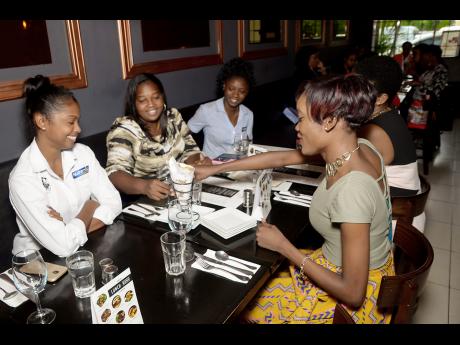 After a successful year and increase in momentum for their mission, Nutramix is aiming to do bigger and better things for 2019. “Our next focus is Youths in Agriculture. In order to change the mindset overtime we need to start with the youth of our country,” said Hamilton. Their next execution will highlight a series of young people that are doing exceptional work within the field. Be on the lookout for the launch of another year filled with exciting new ventures from Nutramix in their quest to make Agriculture the field of choice for your dream career.