The survival of any farmer’s business is not only dependent on local markets, but also from export.

Matthew Jones, the owner of Fidelis Harvests has received valuable assistance in getting his produce into global markets, thanks to Carita Jamaica, a company owned by Rita Hilton.

The Clarendon-based Fidelis Harvests has been in existence for three years. Deviating from his original plans in actuarial science, the 24-year-old Jones took a leap of faith with no experience in farming. He leased 24 acres of land and, after two years of trial and error, his business produces castor beans, okra, sorrel, and scotch bonnet pepper. 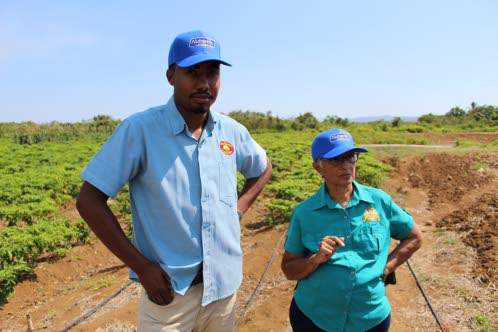 “I always wanted to be involved in farming. I avoided my dream, as I believed that it was not a viable option. But after graduating from The University of the West Indies, I met a farmer who ran through the numbers with me and this rekindled my interest in the field. I then contacted my very close friend and current business partner, Jaymeon Jones, and we embarked on the journey together,” Jones explained.

Jones shared some of the adversities that he encountered during the initial start-up of the business.

“I graduated with a degree that would be more useful in finance and insurance, so the learning curve was very steep. Overall, crop management is much more complex than I ever imagined. Another issue was dishonest workers. Dishonest workers are a huge setback, as this slows down your immediate goals.”

Although he was discouraged to enter agriculture as a profession, he is happy to have stayed the course and to be able to provide employment for others.

“Yes, at first I was discouraged, but it definitely had its importance in my life, as it hardened my determination. My business employs two permanent workers and three on a temporary basis,” said Jones.

Not only has Jones (a Nutramix Youth in Agriculture ambassador) benefited from Hilton’s experience and ability to provide consistent markets for his produce, but he has also gained valuable advice about agriculture and business practices.

“Miss Hilton has been extremely helpful and she has not only provided a consistent market for my produce, but she also gives me guidance on how to access direct export markets.”

Hilton has been involved in agriculture for 35 years. A former Geography teacher, she takes pride in working with young minds.

“My business is basically in the export of fresh produce, so we purchase from farmers all over the island. Our farm in Westmoreland produces ginger, turmeric, pineapples, coca, dasheen, and breadfruit. We also have beef cattle,” Hilton shared.

Her company exports produce to the United States, Canada, the United Kingdom and the Caribbean.

Last year, Hilton was selected as one of the Nutramix Women in Agriculture.

“Nutramix highlighted our business last year and gave us tremendous exposure in the sector. It also allowed us to interact in a real and meaningful way with the farming operations of Imagination Farms. We want others to see that farming a viable business and that there are so many opportunities. It also allowed me to interact with young students in the western part of the island and to highlight the opportunities that exist in different facets of agriculture. I was also able to network with other Women in Agriculture, and this was very motivational,’” said Hilton.

Hilton shared how she was able to assist Jones to access export markets.

“I visited Matthew’s farm and was able to give him an export opportunity for his production. I was also able to connect him to a local processor who is excited by his ability to produce and by his energy,” said Hilton.

She continued: “By making these linkages for a young farmer like Matthew, I am sure that his story will go a long way to inspire other young people to invest in farming. The attributes I have stressed are consistency, honesty, communication, and production to a market need.”