Duhaje Jennings became curious about bees while he was growing up in St James. The little ‘critters’, as he calls them, stung him on several occasions but that only served to deepen his interest, an interest that would later evolve into his very own business — DADA B’s, the largest producer of bee colonies in the country.

“My grandfather was a beekeeper and whenever I visited him, I would often get stung. I used to be terrified of the little critters but after a while, I started to get curious and then curiosity turned to an interest,” Jennings told the Jamaica Observer.

Now 32 years old, Jennings started beekeeping around age 19, and spent the next 10 years creating the Caribbean’s best behaving bees. They are calm around humans, and they make the highest yield in honey.

He told Career & Education how he got his start in agriculture.

“Getting into agriculture was a twist of fate. I always loved the idea of growing my own food, but a profession in the medical sciences was the main option that was presented to me at an early age. While working towards that goal, I started to realise the various advancements that can be made in agriculture [so] I slowly started to shift my focus on the observed gaps and gradually transitioned into agriculture”.

But it wasn’t all smooth sailing.

“One challenge is that enough emphasis is not placed on pushing the agricultural sector in a sustainable manner. There are hardly any new approaches. Another challenge is the availability of land. There are so many idle lands that young persons would like to use but have no access to getting them. Some persons are afraid of leasing the land, for whatever reason,” he said. 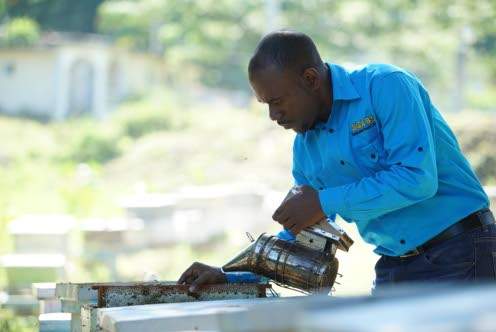 On top of the challenges presented by the field itself, Jennings said he felt snubbed by some of his peers, not unlike several young people who venture into agriculture as a profession.

“In high school and a little beyond, I was usually placed top in the class and for some persons to learn that I am in agriculture now, it’s a big shock. There have been times that I have seen a few past schoolmates pretend they do not see me while I am servicing an apiary.

“Family members were a bit skeptical at first, but they have now accepted my path and provide me with support,” Jennings revealed.

Upon completing studies at Catherine Hall Primary school in St James, Jennings attended Cornwall College and later on, Montego Bay Community College. He also studied at The University of the West Indies (UWI) and the University of Technology, Jamaica (UTech).

“I utilised my BSc in Molecular Biology and Botany (UWI) and MBA (UTech) to care for bees and develop a business model. I started beekeeping approximately 13 years ago while attending the University of the West Indies,” said Jennings.

He gave an insight into the operation of his business.

“I specialise in selling bee colonies. Dada B’s is now the largest supplier in the English-speaking Caribbean. It will take many beekeepers to fill the local and international demand for apicultural products so now I help to facilitate that effort by providing training and starting material such as bees and supplies. My market includes individuals, government agencies and large private entities,” he said.

Jennings continued: “Like many other businesses, it is what you put in that you receive. Beekeeping is not a get-rich-quick scheme. It can fail before one even starts, but if done properly, it can make the effort worthwhile.”

Jennings won first place in the IICA 2015 Youth in Agribusiness Awards. This year he was selected among 12 individuals as a Nutramix Youth in Agriculture Ambassador.

“I always feel good when work that is done in an honest way is highlighted and given some exposure. I think more companies should wake up and realise that the future is already among them,” he said.

He also had some advice for young professionals aspiring to get into agriculture.

“Do not be fooled. When people can put off other events in their lives, they can’ put off eating. Agriculture does not only mean toiling in the sun in a weathered straw hat. We need more persons from various fields to come into agriculture and grow it in non-conventional ways,” said Jennings.