Agriculture is not usually considered an attractive field for young professionals. Just ask Christon Jones, Harrial Sheriffe and Orlando Deer who each suffered resentment at the hands of their friends because of their chosen field of study.

But the trio, all students of the College of Agriculture, Science and Education (CASE), are having the last laugh, having each been awarded the Hon Roger Clarke Memorial Scholarship valued at $250,000 per student.

The awards were presented two weeks ago at a luncheon at The Nest, the CB Group’s first Hybrid Growth Centre which promotes sustainable agriculture.

“My family is actually one of the largest pillars that inspire me to do what I do and work as hard as I do. However, before attending CASE there was discouragement from my peers as they only saw agriculture as tilling the soil with a hoe and being sweaty and dirty in the sun all day. I had to find the motivation within myself, as I was quite determined to be the person in my immediate family to complete college with a degree,” Jones, a 20-year-old from Steerfield, St Ann who is pursuing a Bachelor of Science in Animal Science, said at the function.

Jones was overwhelmed upon being selected to receive the award, which is named in honour of the late Roger Clarke, a former agriculture minister. He was further chosen as an ambassador for the Youth in Agriculture initiative for Nutramix this year.

“I would like to express my sincere gratitude to those who selected me as a recipient of this prestigious scholarship. I hope the CB Group continues to inspire youths to get involved in agriculture as they are the future leaders and stakeholders within the country,” said Jones, who has previously faced challenges with his tuition.

“[When] I am finished studying at CASE I want to attend veterinary school to become qualified to work in reproductive physiology. I intend to return home to help my country and improve local cattle breeds, especially the Jamaica Black breed of cattle, whose population is slowing depleting,” Jones shared. 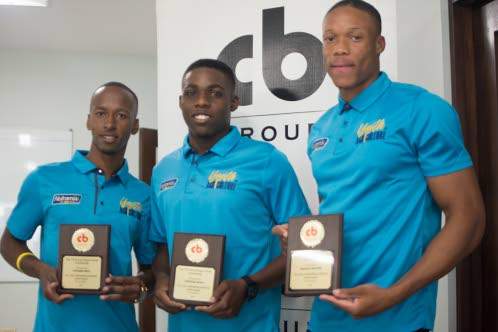 “I am currently involved in crop farming, as I was intrigued with plants while growing up and helping my brother on his multiple crop farm which has sweet pepper, sweet potato and cabbage. Now, being a recipient of one of the scholarships, it is truly an awesome feeling,” he said.

Sheriffe, who is pursuing a Bachelor of Science in Plant Science, says he always strives to leave a mark in anything he does.

“From I was growing up, I developed the habit to lead and leave an exceptional mark in anything that I do. I bring this same attitude to agriculture because of my passion for it. I want my family, and peers to appreciate agriculture,” he said.

He continued: “Upon leaving college I want to further my studies to develop my skills in plant breeding and agronomy. This intention will help to produce substantial amount of food substances in plants which can be further processed into value-added products, which will in turn improve the country’s food security.”

For Deer, a 25-year-old final-year student pursuing a Bachelor of Science in Animal Science, the decision to pursue agriculture with the hope of helping build his country was an easy one.

“I was once involved in small ruminant (goat) production on a small scale, however, after I decided to attend CASE to further my studies. I was forced to sell the animals after they weren’t properly cared for. However, hope is not lost, because my plan is to start all over after I have completed my studies,” he explained.

Several members of his family are also involved in agriculture. “The decision to enter farming was made from I was in the ninth grade at Bellefield High School in Manchester and that was where I started the journey. I grew up in a community called Coffee Grove and I later attended Ebony Park HEART Academy to study Level 2 General Agriculture,” said Deer.

“I realise that Jamaica currently imports a lot of goat and sheep meat on a yearly basis. My objective is to produce as many animals to reduce, if not eliminate, the amount of mutton and chevron meat that is being imported into the country. I will most definitely try to influence other young individuals to be a part of this objective, which is make Jamaica a better place for one and all,” the young man stressed.

Of his scholarship award, Deer said he was honoured to to bear an award named for “a great man such as Roger Clarke who has done tremendous work in the agriculture sector”.

“And for this reason, I walk with dignity and pride, as I aim to follow in his footsteps in making my contribution to the agriculture sector of the Jamaican economy,” Deer told the audience.

The Roger Clarke Memorial Scholarship is awarded annually to an outstanding student at CASE, as judged by performance of the first year in college. The successful student is interviewed and chosen, in conjunction with the Human Resources Department of the CB Group, from a shortlist recommended by the CASE board.

The scholarship is intended to encourage youth to see agriculture as a viable field to pursue professionally. The initiative is the brainchild of the CB Group, and part of its corporate responsibility is to help fund this type of dream in memory of the late agriculture minister.