TWELVE young professionals from various fields in the agriculture sector are being celebrated by Nutramix, as the youngsters take centre stage in the company’s 28-page calendar. 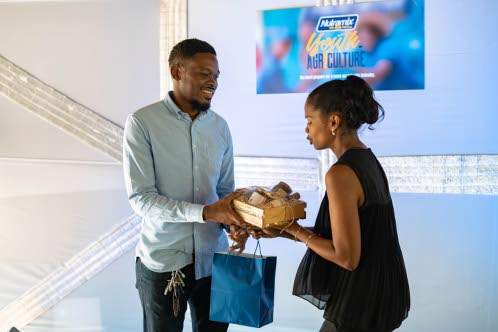 According to Tina Hamilton, brand manager for Nutramix, it has been a mandate of the company for the past few years to help give a voice to those in the agriculture industry who do not feel that they are being heard. Hence the theme, ‘Youth in Agriculture’, for its 2019 calendar.

“Last year we focused on women in agriculture. Most of the small farmers in Jamaica are women and I don’t think it is something we talk about enough,” Hamilton is quoted in a release. “We realised that so many persons were grateful for the knowledge and acknowledgement, but most of the people who told us that they felt inspired by the stories, were young people. This is one of the reasons why we decided that this year we would focus on the youth.”

The young professionals were also honoured and celebrated at a recent luncheon in Kingston.

“For us, it is more than a calendar, it is a reason to talk about the needs of the industry all year long. When the month ends and you flip the page, there is a new story of a young person doing amazing things to grow their community, improve the industry, and help to build Jamaica. We hope to inspire a new crop of persons, young and old, to feel empowered and get involved,” Hamilton is quoted as saying.

The brand manager said there are plans to have the young people’s stories heard.

“Most importantly is our school tour, which will happen during the fall term. We will be in Montego Bay, Ocho Rios, Mandeville, Portland, and Kingston. We are inviting schools from all across the country — some of them will have agricultural backgrounds — but we also want to focus on those students who don’t know anything about farming and agriculture, so that we can show them the possibilities of the different careers in the industry and the viability of building a very successful and profitable business,” Hamilton said.

Nine of the 2019 calendar ambassadors attended the luncheon, the release said.

Sonique Bennett, a 24-year-old involved in cattle training, is happy to be part of the initiative.

“At first it was just like you are going to be on a calendar, but after learning what exactly it is about, I am honoured to be a part of this initiative. Agriculture is a vital part of our economy and I am grateful for the opportunity to be an advocate for such a great initiative,” Bennett said.

“I am so honoured to be among the 12 persons chosen by Nutramix. This is a huge opportunity for young people to take advantage of, because of the resources that are available from a company such as Nutramix. At first I was a bit surprised, but I am excited to be chosen because I didn’t really think anyone would focus on youth in agriculture,” he said.